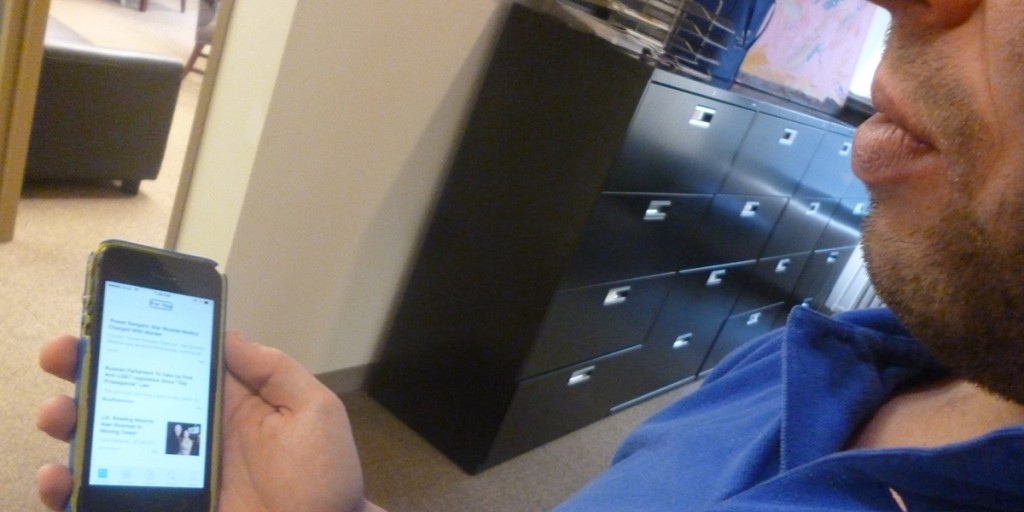 As an iPhone user over the past several years, I have seen many useful updates to iOS.  Each update has brought useful changes to the iPhone and for its users, and the technology continues to improve. The latest release of iOS 9 is no different and improvements made directly impact VoiceOver users.  Here are several updates I personally find both important and useful as an iPhone user using VoiceOver.

The most important improvement to iOS 9 has come by way of improvements under the hood.  Across the operating system, apps and key technologies have become more efficient.  As a result, the life of a single battery charge can now be extended.  Once the power level hits about 20%, a message will be displayed asking the user if they want to enter a low power mode.  The system will begin to run the device much more efficiently in order to conserve battery life.  Another cool improvement has to do with the ambient and proximity sensors.  Your phone knows if it is face-down on a surface.  This ability prevents the screen from turning on when a new notification is received which in turn also leads to battery conservation.

Throughout the years as a VoiceOver user, I continually used the same assisted voice known as Samantha.  However, with iOS 9, VoiceOver users now have the ability to change the voice we hear while interacting with the phone.  Right now I am using Karen which is Australian and it truly feels like an Australian woman is right there helping me with every task.  Other voices include:  UK English – Daniel; Irish English – Moira; and South African English – Tessa.  Each voice must be downloaded to the phone prior to use.  This is an easy task which only requires you to navigate to VoiceOver settings, select the voice and begin the download process.  These voices will truly rejuvenate the user and make it seem like the very first day of having your very own iPhone.

Apple News is another quite nifty addition to the iOS 9 update.  Prior to this update, I, along with many iOS users, would have many apps taking up both spaces just to read the daily news.  Apple News now puts all news in a central location making it an easy to navigate newsfeed.  When you first set up your news, the prompts ask what sort of news outlets you would like to receive news from.  Don’t worry, this can always be easily changed down the road.  Over time, the app will learn what sort of news you like to read and will begin sending and recommending related stories.  Also, for those social media aficionados, share buttons make it quite simple to share with Facebook, Twitter, Google + and others.  This app will truly help you save time when you want to quickly read the daily news.

Another great addition to iOS 9 is that SIRI has been significantly improved.  There is a much better understanding of what you say, increased accuracy and quicker results. If you have a ton of photos or videos on your iOS device, SIRI makes it much easier to search and find the photo or video that you want at that moment in time. This means that you can search, with SIRI’s assistance, by date, location and even album titles. For those who like to share their content to social media, this feature will not only allow you to share at the present time with much more ease, but with friends and family down the road. The new proactive SIRI also has the ability to set reminders of what you are currently reading. For example, when you happen upon an important email that needs attention in the near future, just ask SIRI to remind you about it and you will soon get a reminder to take another look at that specific email.

Perhaps one of the top features of iOS 9 is the increased ability to multitask.

Tons of possibilities exist with these productivity options so explore and begin your multitasking now!

iOS 9 has brought many new features that will allow users to have a significantly more enjoyable experience. Some of these current features are long overdue, such as the ability to multitask with ease due to our multitasking nature and desire to always be connected to social media. The increased speed, battery life and updates to SIRI will now add possibilities for VoiceOver users to interact with their iOS devices for a longer period of time before a recharge, along with a much more intuitive SIRI to help the user find and recall important information.

These are just a few of the new features that come with iOS 9, but take the time and examine all of the other features and what new possibilities they will unlock.

Shawn has been a Second Sense volunteer tutoring our adaptive technology clients since June of 2015 after completing our comprehensive computer course.  He is also the General Manager of Genesis X Fitness handling all business affairs and marketing for the company.  Shawn also is employed by Sassy B. World Wide Productions, Inc. managing their social media efforts.  Read more about Shawn and the company he and his brother have created at Genesis X Fitness.