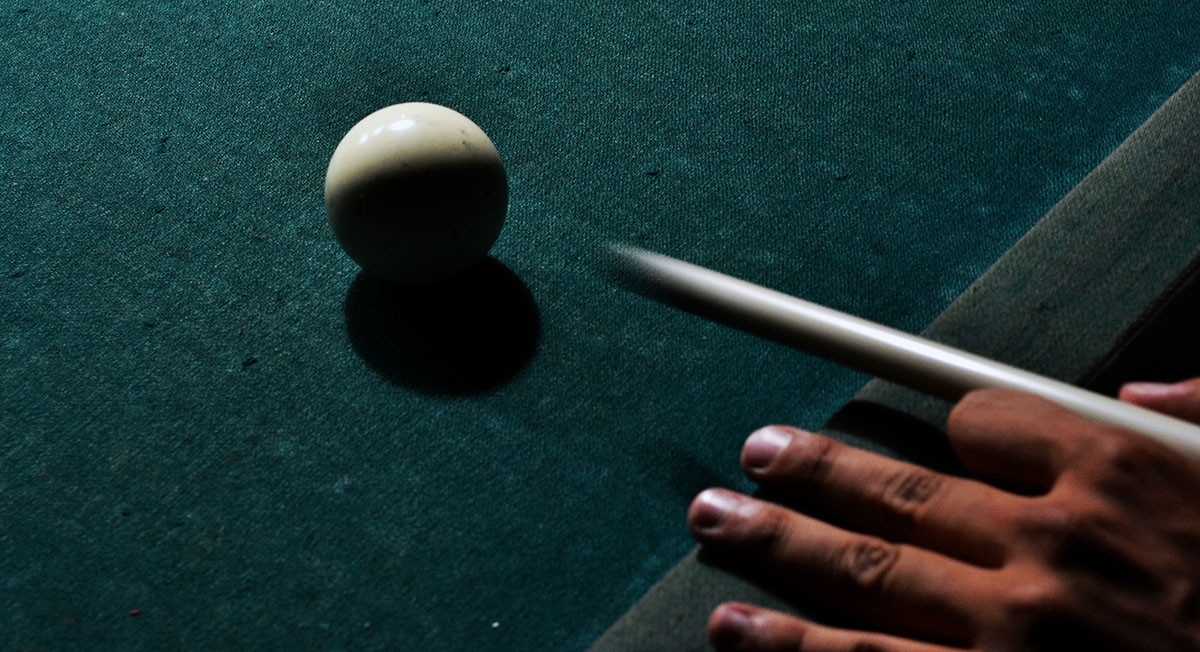 As a random disruption in my genetic code has replaced my vision with a constant series of swirling lines and exploding dots, I miss two things the most. I haven’t seen a human face in a decade. I have no idea what my wife looks like though I sleep next to her every night and my children remain faceless.

During college, instead of studying between classes, I spent an obscene amount of time at Johnny Red Shoes Billiards. As a regular, I never had to give an ID in exchange for a table and my time came at a discounted rate.

Eventually, I caught the attention of some regulars. Not because of my skill, but as a target for better players. For two dollars a game, I played against a middle aged African American man named Leon. I wore a baseball cap and with long shots the brim blocked my view, so I had to turn the hat around. Leon often grumbled his disapproval.

“I can’t be playin’ no white boy with his hat backwards.”

Outside of calling difficult shots, we hardly spoke. Despite the relative silence, I learned a lot from just watching him. His approach to the game differed from mine. After a few months, the gaps between wins and losses grew more narrow, though I never won, I just lost less.

Though my love for the game never waned, my ability to get to the pool hall grew more difficult as my night vision deteriorated. I joined a league in 2008 and struggled to keep up with even the most mediocre players.

The bizarre nature of retinitis pigmentosa fooled me into believing I could still play. From a distance, I recognized the patterns and combinations of shots I needed to take to win.

Ok, I’ll take the five off the bottom rail with a bit of top left, the cue will spin up to the other side where I can make the four and break out the one and the seven.

I had to walk away.

My cue still waits for me tucked away in a dark corner of my basement. It was a Christmas gift from my cousin Will. The shaft is light brown, almost white and the base is deep red with black grips. The bottom has a small white shamrock with a capital M printed in the center, a Mcdermott. I named her Alabama.

As the years pass, I find it doubtful that I’ll ever play again. Perhaps if some geneticists can figure things out or a biomedical engineer develops a miraculous sight-giving device, I’ll finally get to see my wife again. I’ll once again lose myself in her gray, blue eyes. I’ll see my children for their true beauty instead of the imagined faces I’ve puzzled together through memories and partially glimpsed images. I’ll see myself in a mirror and see the gray that’s crept into my beard and hair and wonder what the hell happened.

Then I’ll find the old leather case, piece ‘bama back together, and gasp at the satisfying snap of a solid break and watch as the stripes and solids speed across the green landscape and settle just as I finish chalking up and call my first shot.

Brian was a participant in our recent Creative Nonfiction Writing course at Second Sense. Inspired by one of the class reading assignments, he submitted this piece for class discussion. Brian and his brother, Jack, who also has retinitis pigmentosa, have co-written the upcoming film, York Witches Society. Release date and streaming platform to be announced soon!