Do I Really Need an iPhone?

How I Lost the Battle! 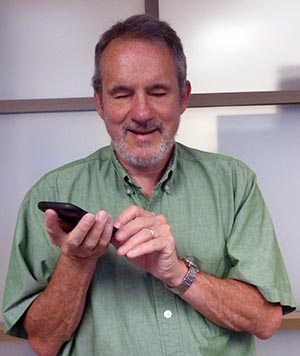 Marv demonstrates the VoiceOver feature on his iPhone

Since I’ve been involved with Second Sense for a long time, I knew about the iPhone’s accessibility from the time it was introduced with the 3GS.  Both staff and students were surprised that I didn’t jump on board with the iPhone early on because I do like new technology.  I never doubted its usefulness, however, I just didn’t think it would be my cup of tea.

I used the usual arguments against getting the iPhone:

To me, these were excellent arguments to keep my simple cell phone.

Over time, these arguments became less and less valid.  More and more blind people I knew were getting iPhones.  My best friend from high school got one.  He is not even a computer user.  He had a lot of trouble for the first two weeks, but once he started making progress with his phone, he loved it.

I began to realize that I could get lots of help if I needed it.  I could talk to the phone if the screen was giving me problems.  So, I began to realize my next phone would be the iPhone and I started to prepare myself for the transition.

I asked my friends questions to get a bit of understanding about how the phone worked.  I bought Anna Dressner’s book from National Braille Press before I  purchased the phone.  By the time I got the phone on July 1st, I had learned a bit about gestures.

The rep at the AT&T store in Homewood, Illinois was a huge help.  VoiceOver was turned on for me and he made sure the accessibility shortcut was set.  He set up my Apple account with my email address.  I did have him set my passwords for email and the Apple account the first time.  I was on my way!

I was shown how to make and receive a phone call.  Making calls was easier on my iPhone than it was on my old phone.  It was now time for me to just put in the work to use my new phone.  I read my book to get an idea of the logic of the phone.  The real progress was made by trying things on the phone and  this is where the practice paid off.

I did have a goal.  I was scheduled to go to Oregon on August 7, so I had a little over a month to get comfortable with the phone.  I wanted to see if I could learn enough on the phone before camp to leave my computer, iBill, alarm clock and XM radio home.  By the third week of July, I had decided to leave those items at home.

I now make more calls with my iPhone than from my home phone because of the contacts I set up.  I like texting a lot.  I thought I’d use my voice for texting and calling, but I’m comfortable with using the on-screen typing.  Understanding the different gestures is really important.  If you do that, you’ll greatly increase your chance for success.

Are you a convert?  Tell us your story!

Marv Commerford is a volunteer Technology Tutor at Second Sense.  He helps our clients with vision loss navigate technology and learn how to use it to enhance their independence.