In the past five years, Albert Schmige has gone from being a local obscure artist to achieving national recognition. In 1992 he was declared legally blind and could not drive due to macular degeneration. In 2005 while employed as a message therapist at the Kalahari resort, he exhibited his art for the first time at the Memorial Union Galleries in Madison, WI. Since then, Albert has been featured in numerous newspaper article as well as local television interview. Most recently, with the help of art sales at the Red Geranium, a partial travel grant and donations, he was able to attend the Shared Visions show last year in So. California. This show is exclusively for the blind and visually impaired artists and is renowned internationally. On opening night over 400 people attended. Only 4 pieces sold, one of which being an Albert Schmiege original.

Schmiege works exclusively in oils on canvas. His subject matter includes abstracts, floral, landscapes and basically anything he can visualize in his head. Recent commission works include 3-D tactile pieces and paintings inspired by your favorite song or CD. Many of his works incorporated into the seasonal displays at the Red Geranium. He will be one of the featured artists in the month of April. The monthly Artist showcase has been instrumental in providing a platform in which to share his story. 2012 has already shown promise of additional opportunities to share his story and art with yet a wider audience he has already been asked to submit works on not only for the Shared Visions California show, but also to the Passionate Focus show in Chicago, sponsored by Second Sense. For the latest information on upcoming shows and local exhibits, contact artist directly at 1-608-847-5161. 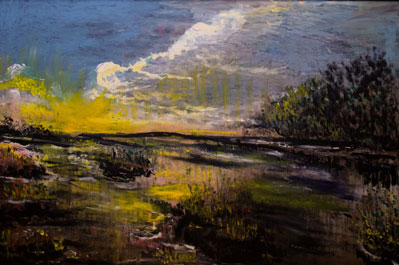