You are here: Home » About » Client Stories » Kendrick’s Story 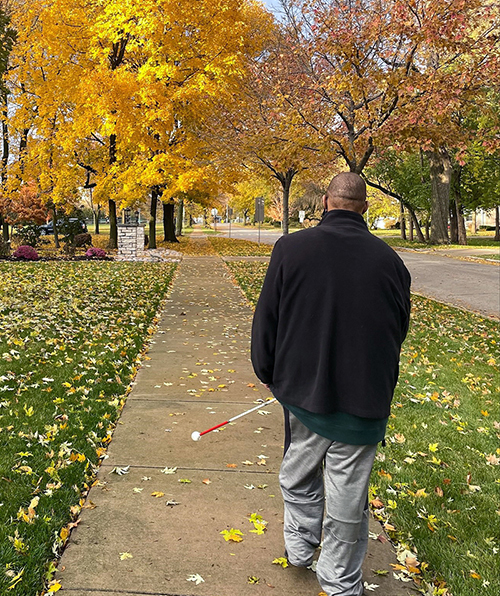 “I became blind five years ago (this January 12) after suffering an embolism. I had a heart attack and a stroke. I died twice, was in a coma for two months and woke up blind.”

Kendrick’s spent several years addressing the dual challenges of learning to walk and talk again. Then, four and half years later, Kendrick came to Second Sense and started working with Siobhan.

“Being a blind person, one of the things I wanted was to be able to see again. And, at times, I think I do see things.”

This desire lead Kendrick to an interest in echolocation. This skill of locating and identifying objects using sound and their echoes allows Kendrick to “see things auditorily rather than visually.”

And, he soon found out that Siobhan was interested in it as well. Siobhan is a certified orientation and mobility specialist at Second Sense. She sees echolocation as another tool her clients can use to aid in their independent travel.

Kendrick’s first mobility lessons with Siobhan focused on his immediate neighborhood. He lives close to a Metra train station, so he learned to walk the best route for him to get there safely.

“We walked that route several times. It included crossing a couple of streets — one with a traffic light. Using sound, I learned to understand the traffic flow. This lets me know when it is safe to cross. I give all props and thanks to Siobhan for teaching me these things. I now have the reasonable expectation that I can perform street crossings when needed.”

Kendrick was born in southern Illinois, so he is new to the Chicago area. “People up here describe everything in terms of streets and directions.” So Kendrick is working on creating a mental map of the Chicago area. So he can travel around Chicago independently.

But Kendrick isn’t satisfied with traveling at a walking pace.

“This past summer I tried the sport of beep baseball. I played with the Chicago Comets. I wasn’t sure if I could still run, but quickly learned that I could.”

Kendrick can travel on Metra from his home to downtown Chicago. Now he wants to expand his travel options. “I want to learn to travel the different ‘L’ lines — Blue, Red, Pink — so I can explore the city safely and efficiently.”

Kendrick hopes he and Siobhan can work together to achieve these goals, using all the tools of orientation and mobility — including echolocation.