There has been a lot of buzz lately about the ELIA alphabet.

The ELIA alphabet shapes are based on the Roman alphabet but contained within “frames” of different shapes (circle, open circle, square, pointy-top with a square bottom).  Within the frames are details such as a dot or a line which characterize that particular letter.  ELIA has been tested many times and the average person takes 3 hours to learn to identify the new symbols.  ELIA is read with the fingertips in a circular scrubbing motion.  The ELIA frames can be scaled to a font size to suit the reader.

Is Braille Too Difficult to Learn?

The creator, Andrew Chepaitis, stated in an interview last year that “The purpose of our alphabet is to help people to achieve literacy.” Mr. Chepaitis, in his YouTube video, states that braille is too difficult to learn by people over 21 years of age unless they are “highly motivated, extremely intelligent, and have super tactile acuity.”  I don’t agree.  Having taught braille for nearly 20 years to adults with a wide range of physical and mental abilities, my professional experience tells me that this is not so.

I think many people feel braille must be difficult because the dots are so small and close together.  Well, there is a misconception about what is actually happening when a person is reading braille.  Braille letters are recognized by overall shape — as if playing “connect the dots” and not by feeling each individual dot.  Memorizing the shapes of the braille letters is the easy part for adults.  What takes up the time is the development of the person’s sense of touch.  Children who learn braille are given the time to develop this.  Adults who want to learn braille either do not know they need to spend time on developing their tactile discrimination or it is not part of their instruction.

ELIA is read with a scrubbing motion which most braille instructors do their best to discourage in their students as this habit impedes fluid, quick reading.

Is it worth it to learn something quickly in the beginning only to be stuck reading at a slow speed for the rest of time?  Good braille instruction involves time to develop tactual skills before asking the student to identify letters.  This takes time but it creates better braille readers as proved by Dr. Sally Mangold back in the 70s. (Mangold S.S. (1978). Tactile perception and braille letter recognition: Effects of Developmental Teaching. Journal of Visual Impairment and Blindness, (72) pp. 259-266.)

Why Create a New Tactile Alphabet?

Why was ELIA created when tried and true tactile alphabets already exist? What about the Moon alphabet? 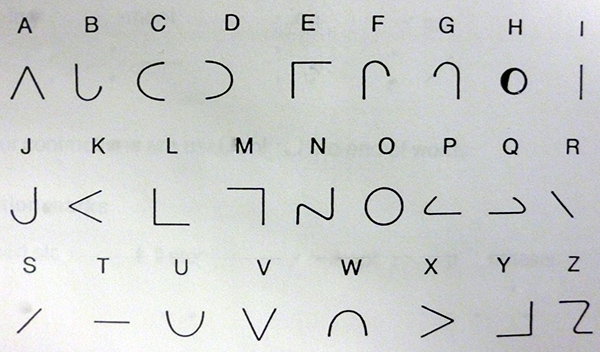 William Moon developed the Moon alphabet in 1845,  Although he knew braille and other tactile alphabets of the day, he felt that something easier to feel and learn should exist.  The alphabet was adapted even for languages in other countries. The alphabet shapes are much closer to the Roman alphabet and therefore very easy to memorize. 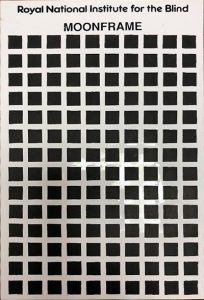 ELIA currently requires technology to reproduce in tactile format at significant expense to the individual (the cost of a computer and a special printer at the very least).  That’s a very expensive label for your can of soup!  Moon is so easy for an individual to produce at home and the technology already exists to do so.  Why create a new tactile alphabet that requires a computer and a specialized printer to create?

Is There Still a Need for an Alternative Tactile Alphabet?

Moon was in use for about 100 years.  It enjoyed a resurgence of popularity in the early ‘80s.  The Royal National Institute for the Blind (RNIB) in England promoted and supported Moon.  However, its popularity didn’t last.  RNIB currently recognizes the need for alternative tactile alphabets but is no longer supporting the instruction of Moon.

The use of Moon died out just as technology got better.  ELIA was also started long before technology caught up with meeting the needs of adults with vision loss.  Even with all the support given to Moon and its use, it still didn’t stand the test of time.  I’m not sure that any alternative to braille would.  Now a person can:

If they don’t want to learn braille, or feel that they can’t, there is no real need for them to learn any tactile alphabet. Modern technology allows a person to complete the tasks of daily life that they once needed a tactile alphabet for. It is now a choice, not a necessity.

Why Take the Time to Learn Braille Rather Than Another Tactile Alphabet?

There are reasons why braille has survived for 200 years as a tactile code.  At one time there were many code options for blind readers and in the late 1800s, a person had to be fluent in all of them just to gain access to what few reading materials existed.  Braille was the preferred code of many educators and blind people back then and remains so today.  Read Robert B. Irwin’s The War of the Dots for more on why braille is used and not another option.

You don’t have to learn the entire code to use braille in daily life.  With knowledge of only the braille alphabet a person can:

Braille is about having access to one’s environment and the printed word — to be able to write it down and read it rather than have to remember it. Not only are the production methods cheap and easy to use at home, it’s mass-produced and already out there in the world on public signage, menus, and now on many products in stores. My braille students often take braille because they want a pencil and paper equivalent—not technology. They are comfortable with using a $10 slate and stylus to write things down. How are they going to produce the same list in ELIA if they can’t do that without using a computer?

Many people still choose to read books in braille for pleasure.  However, many more enjoy listening to books with the materials from the National Library Service (NLS) Talking Books.  The choice to switch to audio may be a matter of convenience—braille (and other tactile codes) create very large and heavy volumes to carry around when produced in hard copy and not everyone can afford a refreshable braille device to read their books on.

However, if you do take the time to become proficient in braille, then you can read books for pleasure, restaurant menus, bank statements and other commercially produced materials.

Reading material is available in hard copy or electronically. There has never been a time with so much access to the printed word—and it’s taken society a long time to get to this level of awareness and access for blind and visually impaired people. To have ELIA as another commercially produced option would be taking accessibility options back to the past. Braille is already well established as the code to use. If a person chooses to learn something else, they will be severely limiting their access to the printed word, increase their expense and have difficulty producing it themselves at home. A person who learns braille is not facing any limitations!

Polly is the Director of Vision Rehabilitation at Second Sense