Are You Ready for Unified English Braille?

by Polly Abbott, Director of Services at Second Sense 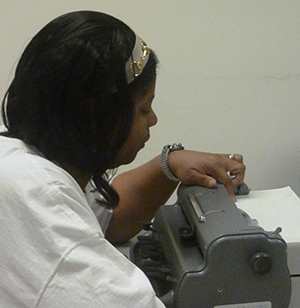 I recently returned from the CNIB National Braille Conference in Toronto.  The conference is entirely devoted to braille: production, transcription, instruction and how it all intermingles with the new developments in technology.

The morning keynote was given by Peter Osborne, Head of International Development, RNIB (Royal National Institute for Blind People).

The keynote speech was very interesting and it was encouraging to hear how much is being done on a global level to promote access to print through braille.  However, I had gone to the conference to refresh my knowledge of the braille code.

Did You Know The Braille Code Has Changed?

It has.  Ten years ago when I was still an employee of CNIB, happily teaching American Literary English braille code to blind Canadians, we were hearing rumblings about changes that would unify how Great Britain, Australia, New Zealand, Canada and the U.S. transcribed print into braille.

I got to see very early samples of documents using the proposed changes to the code.  We invited our braille-using clients in for seminars to hear what they thought of the proposed changes.  I can still remember one gentleman’s delighted laugh every time he read the symbol for a bullet point —something the current code just can’t do!

Well, now the future has arrived!  Australia was the first country to switch over.  Canada is already using the UEB in many instances — the conference program, for instance, was in UEB. The United States is not far behind.

The United States voted and approved to adopt the Unified English Braille (UEB) code in November 2012.  I am very excited about changing to the new form.

A great way to quickly and easily find out more about the UEB and when it will impact the United States would be to listen to the Seminars@Hadley webinar: UEB & You: What You Need to Know About Unified English Braille

The Braille Authority of North America (BANA) has the changes listed on their website. BANA representatives have been tirelessly presenting at professional and consumer group conferences to get the word out about the changes.  No official change-over date has yet been set for the United States, although experts estimate about 5 years.  Second Sense will also be helping get the word out…watch for future programs concerning UEB!

Try out the UEB with these timely braille documents: